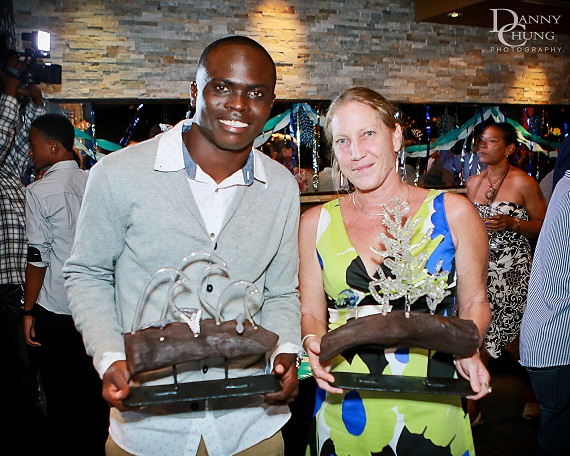 Oceana has celebrated Ocean Hero Awards since 2009—a way to recognize and honor leaders in ocean conservation, education, and advocacy. Past recipients range from Jean Beasley, founder and director of the Karen Beasley Sea Turtle Rescue and Rehabilitation Center and winner of the Animal Planet Hero of the Year, as well as Don Voss, an avid scuba diver who founded a marine debris organization. Recently, Oceana in Belize has issued their own Ocean Hero Awards to two very deserving Belizean conservations that work to protect marine environments around Belize. Take a look below to learn more about each recipient.

Lisa Carne has been a leader in coral reef restoration and biology around Belize. As a young biologist in 2006, Carne witnessed the devastating impact of Hurricane Iris on southern Belize and became troubled about Belize marine environment’s vulnerability to climate change. Since then, she has used Laughing Bird Caye National Park as a natural laboratory, and established a coral “nursery” in attempt to restore critically endangered Acropora corals. Today, her “Fragments of Hope” project has established has established more than 5,000 coral outplants in 18 sub-sites around the island.

“Laughing Bird Caye is a high traffic area; it’s very close to Placencia. It’s a no-take zone which means there is no fishing allowed and it supports a real crucial ecosystem within the reef so that there is a good balance between the fish, the corals and the invertebrates,” Carne said in a press release. “I have a lot of help from the tour guides and fishermen because they see that it is working; that these corals provide habitat for lobster and other organisms.”

Take a look below to learn more about her work:

Jamal Galves has been a self-proclaimed “manatee protector” since age 11, and is now a widely-recognized expert on these animals and their conservation. On average, manatees can live as long as 50 to 60 years in the wild, largely because they have no natural predators. But manatees are an endangered species due to threats like boat collisions, destructive gear like nets, and habitat loss.

“Manatees aren’t just cute. They are in trouble and they need our help. I’ve dedicated my life to conserving these creatures,” Galves said in the release. “Belize has one of the healthiest populations of West Indian manatees in the world. I just want to inspire other Belizeans so that the interests of manatees will always be safeguarded.”

Take a look below to learn more about Galves’ work:

“Our challenges are many: Our precious marine environment is still at risk from offshore oil concessions; our charismatic species and juvenile fish are still at risk from both destructive gear and disregard. Sensitive habitats along our coast and on our islands are still at risk from unjustifiable development projects. And on top of it all, the marine environment we all depend on for our food, our jobs, and our very cultural identity, is at risk from the global crisis of our generation, climate change,” Oceana in Belize Vice President Janelle Chanona said at a ceremony honoring the Ocean Heroes. “Our challenges are many but our collective passion is deep. Lisa and Jamal exemplify the type of heroism we all need to strive for. And like them, Oceana is working fervently to help consumers become informed citizens on environmental issues so that you can help to determine the quality of your future; your family’s future; Belize’s future.”